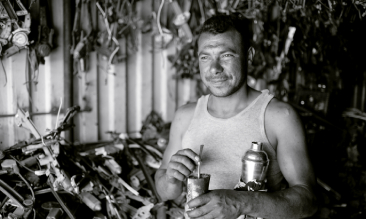 What Makes A Photo Tells A Story?

In this episode, I chat with Jaime Permuth, an award-winning photographer and professor at the School of Visual Arts in New York.

With the tremendous growth in photo sharing – globally, people share 95 million photos on Instagram every day! – I am often asked how can you tell a story in a single photo? I have already shared my thoughts about the subject in my article “5 Easy Ways to Create Narrative Images.”  But for this episode, I decided to consult with an expert.

With video, it’s much easier as it’s, in essence, a sequence of images where you can tell a complete story with different characters and scenes. But what you do when you need to compress an entire story into a single scene? I discussed with Jaime about his storytelling approach, the key narrative elements he uses. Jaime also presented a few photos and discussed their backstories and the visual storytelling technique the photographer used.

What you will learn:

Watch the full video recording of this interview:

You can also listen to the audio podcast of this episode.

A bit about Jaime.

He is an award-winner photographer based in New York City. Jaime is known for his long-form documentary work and his photographs have been shown nationally and internationally, including NYC venues such as The Museum of Modern Art, The Queens Museum of Art, The Bronx Museum of the Arts, The Museum of the City of New York, The Jewish Museum, El Museo del Barrio, and The Brooklyn Museum of Art. He is also a Faculty Member at the School of Visual Arts, where I teach in the Master in Digital Photography and also at the New York Film Academy’s Conservatory Program in Photography.

It was a fascinating discussion you’ll learn a ton from. I really enjoyed discovering the stories behind the photos Jaime shared. You realize that unlike video where the visual storyteller serves you an explicit sequence of events, photos require the audience to infer from what they see in a single frame, and use the invisible parts to complete the story in their minds.

What the photographer chooses not to show in a frame is even more important than what she chooses to show.

In this light, unlocking the story behind a photo, is, in essence, an interactive mental experience where the eye of the viewer plays the role of a video camera, looking around, capturing meaningful key details in the photo, and then creating a narrative sequence of visible and invisible elements that finally build a story.

All stories by: Shlomi Ron
What is Inclusive Storytelling?
How to Deal with “Unexpected Villains” in Your Story?