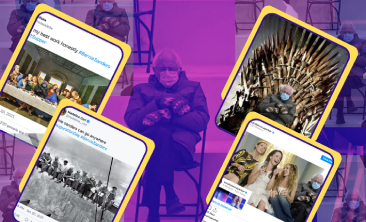 Ever wondered what made Bernie’s inauguration photo go viral?

Before we jump into the photo, let’s look at the context this viral photo sprung from.

We’re living in wild times where reality continues to exceed our wildest imaginations.

Eleven months into the pandemic that has wreaked havoc with over 100 million CoronaVirus cases of which 72 million have recovered and over 2 million deaths worldwide – the US is occupying the first place with 26.8 million cases and 453,000 deaths (source: WorldMeter.info).

This is a unique stage in a rolling story, when Covid numbers are spiking everywhere, devastating economies, social and political fabrics, yet in a record time the scientific community came up with vaccines to eventually make it all go away.

Distribution has started but real change will likely take time around next fall.

Here in the US we’ve also experienced a divisive social and political climate that climaxed into the January 6th insurrection at the Capitol and new hopes for the incoming administration to sooth and make amends.

The long months of social distancing, job losses, and toxic social environment – have all made people look for some respite from all the craziness.

And then it happened.

A simple innocent moment everybody can gather around especially during these cold winter days – popped up almost out of nowhere.

Into this conflicted setting, this moment has arrived when one senator from Vermont got caught on camera, snuggled in with his comfy dark green coat and patterned mittens during a rather cold day at the inauguration ceremony.

Of course, I am talking about Bernie Sanders In a Chair meme that has literally broken the Internet.

I find this viral photo as a fantastic opportunity to unpack the visual storytelling drivers that have made it so wildly popular.

It all started when around 11:30 AM ET, photographer Brendan Smialowski of the Agence France-Presse news service looked for ways to capture a slice of life during the inauguration experience and took a simple photo as he told CNBC: “That picture is really not that great. It’s not the nicest composition in the world.”

One of the early signals came on Jan 20th at 11:27 AM ET, Ashley Smalls, a Ph.D. student at Penn State, shared Smialowski’s photo, writing “This could’ve been an email.” that has generated over 1.1 million likes and 132,000 retweets.

Inauguration day ended up with Bernie’s photo sharing the second spot with the Obamas in conversation volume:

It all started when around 11:30 AM ET, photographer Brendan Smialowski of the Agence France-Presse news service looked for ways to capture a slice of life during the inauguration experience and took a simple photo as he told CNBC: “That picture is really not that great. It’s not the nicest composition in the world.”

One of the early signals came on Jan 20th at 11:27 AM ET, Ashley Smalls, a Ph.D. student at Penn State, shared Smialowski’s photo, writing “This could’ve been an email.” that has generated over 1.1 million likes and 132,000 retweets. 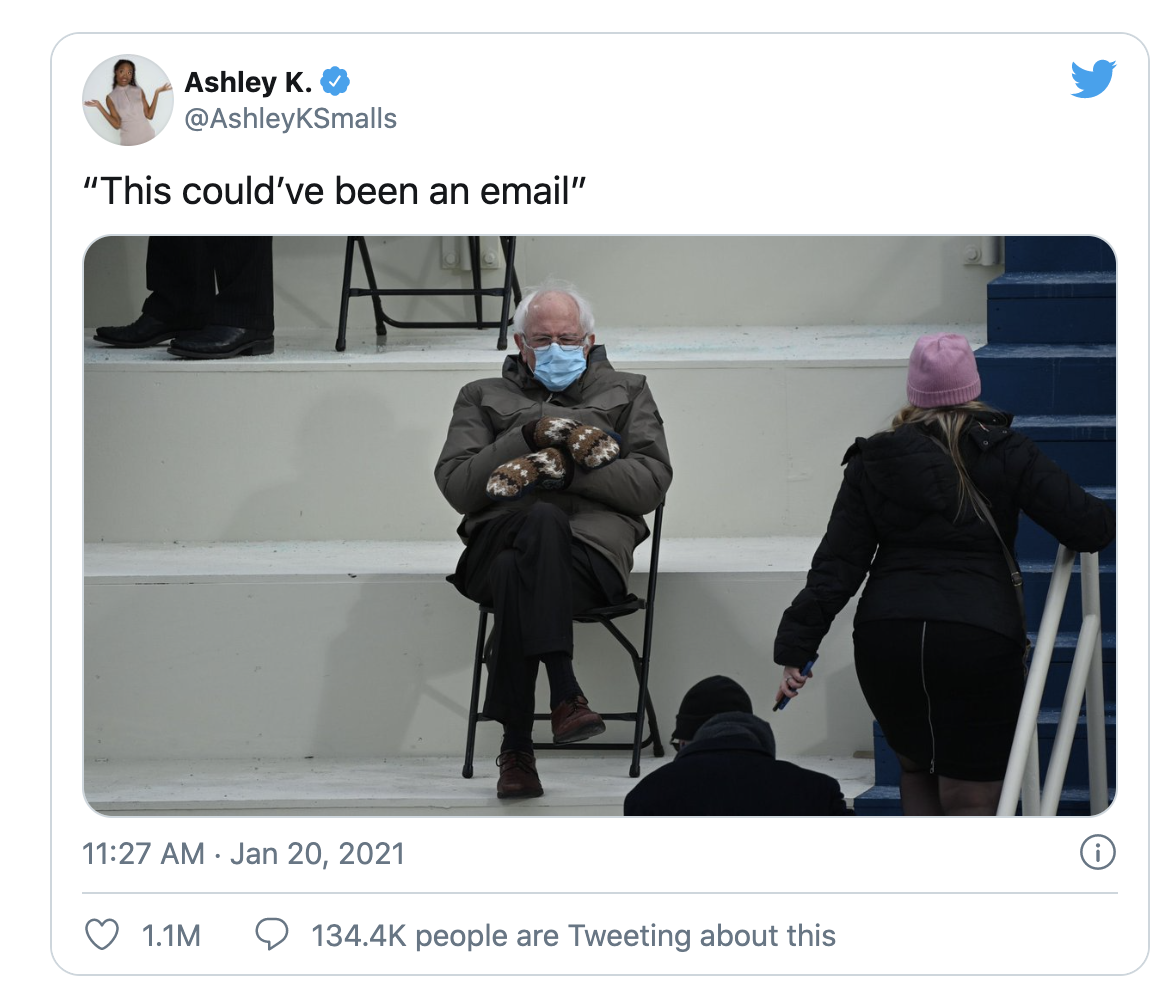 This tweet among million others have opened the floodgates to super fertile user-generated content that was further amplified by celebrities including one with the senator seated next to the ‘Sex and the City’ cast posted by Sarah Jessica Parker, Guy Fiery and many others. 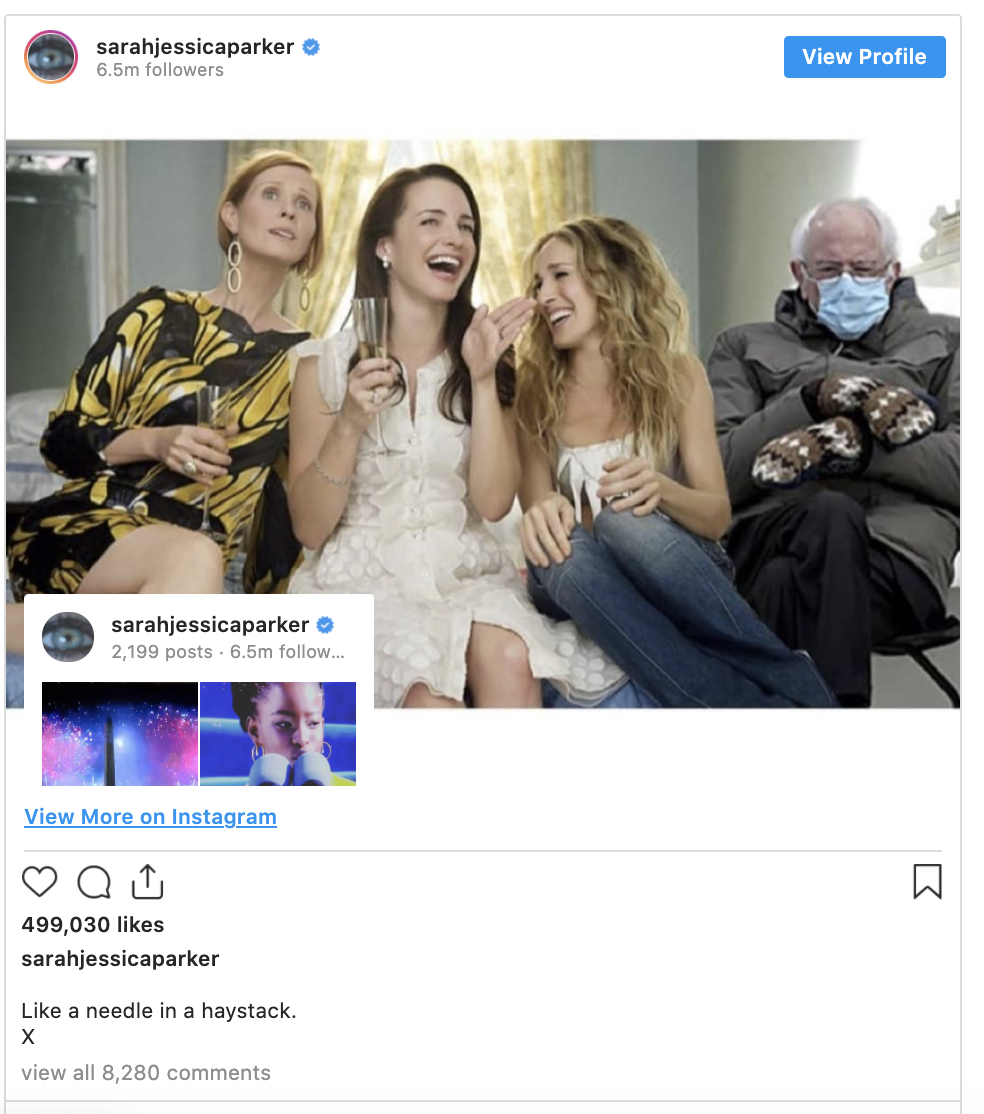 With all this tremendous response this photo has created, Sanders confessed he had no idea about this viral tidal wave the photo unleashed. “I was just sitting there trying to keep warm, trying to pay attention to what was going on,” he told Seth Meyers during an interview on “Late Night with Seth Meyers.”

Later we also learned that the creator of Bernie’s cozy mittens is Jen Ellis, a teacher from Vermont who gifted the senator the pair about two years ago. “They are made from repurposed wool sweaters and lined with fleece (made from recycled plastic bottles),” she explained in a tweet. 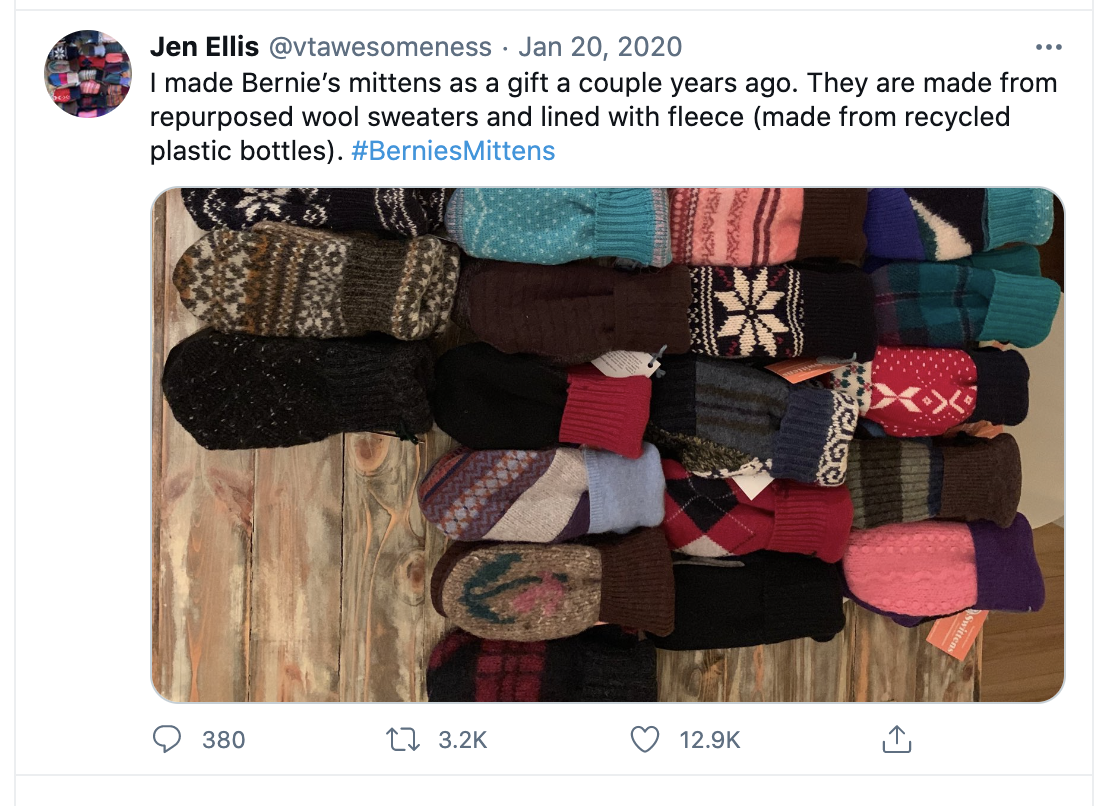 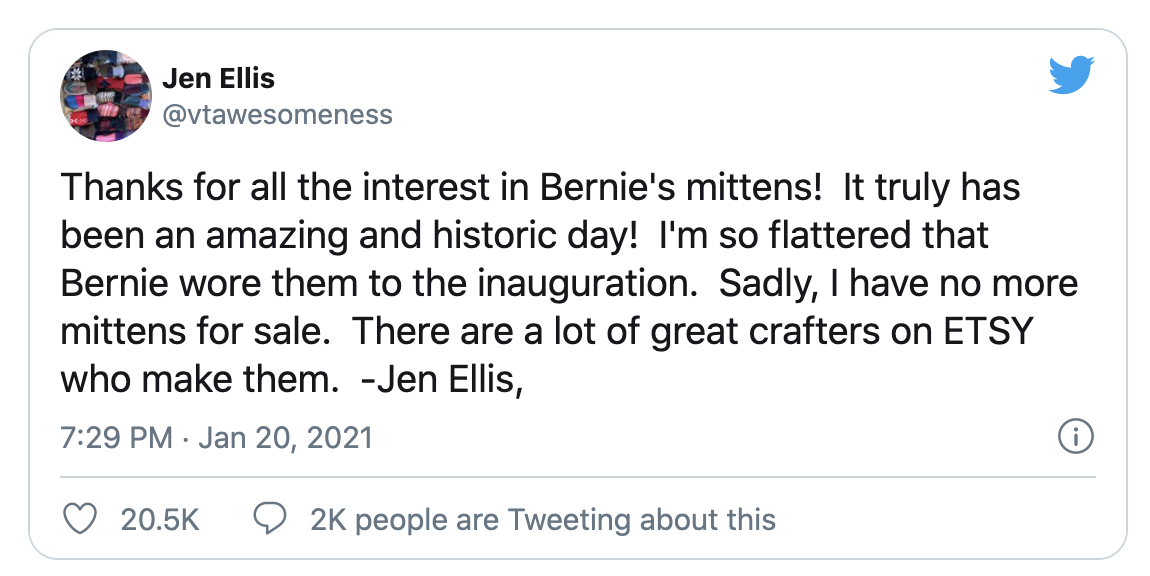 The meme received so many creative manipulations with brands and people making meme generators to make it easier for people to join in and create their visual interpretations. 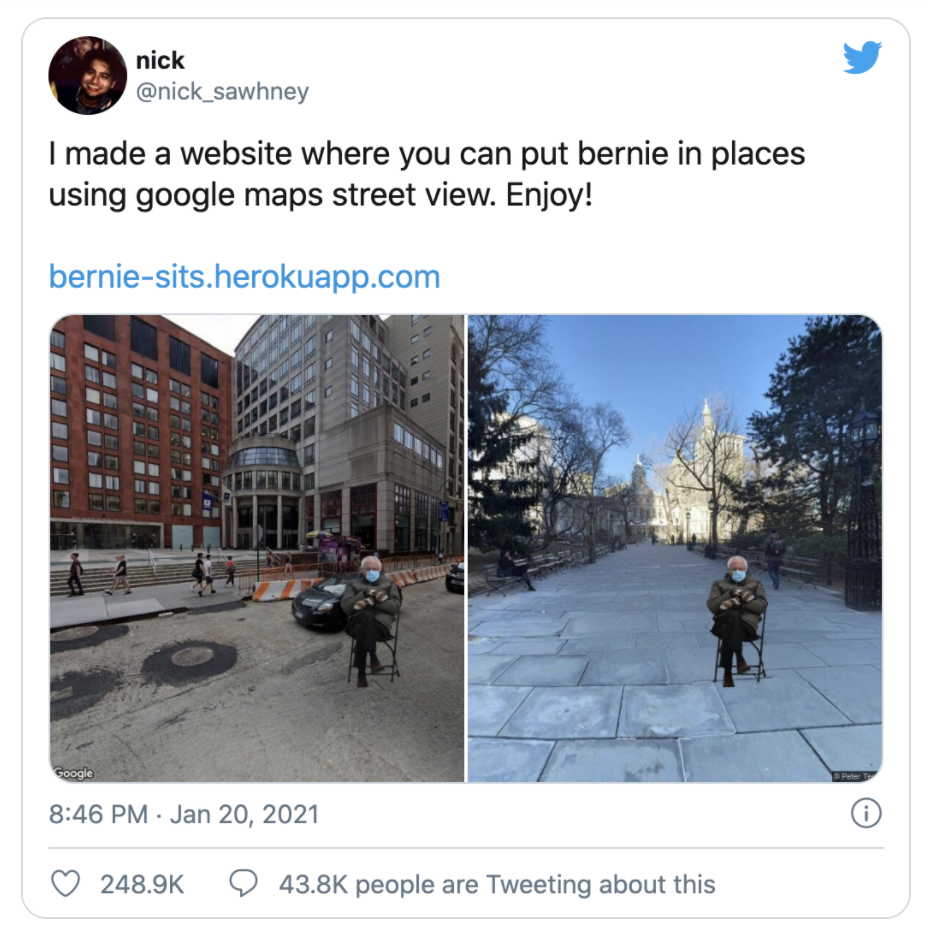 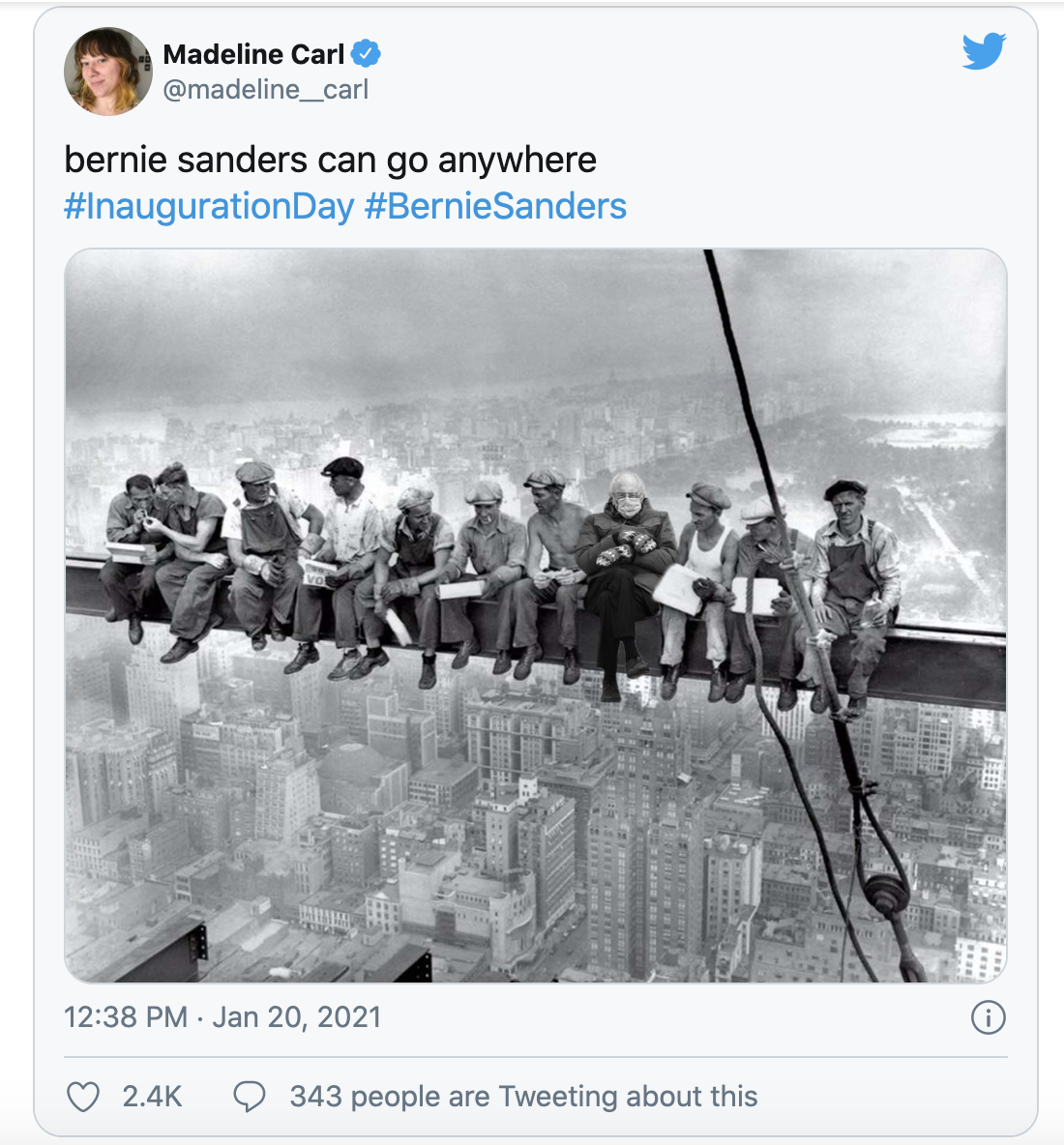 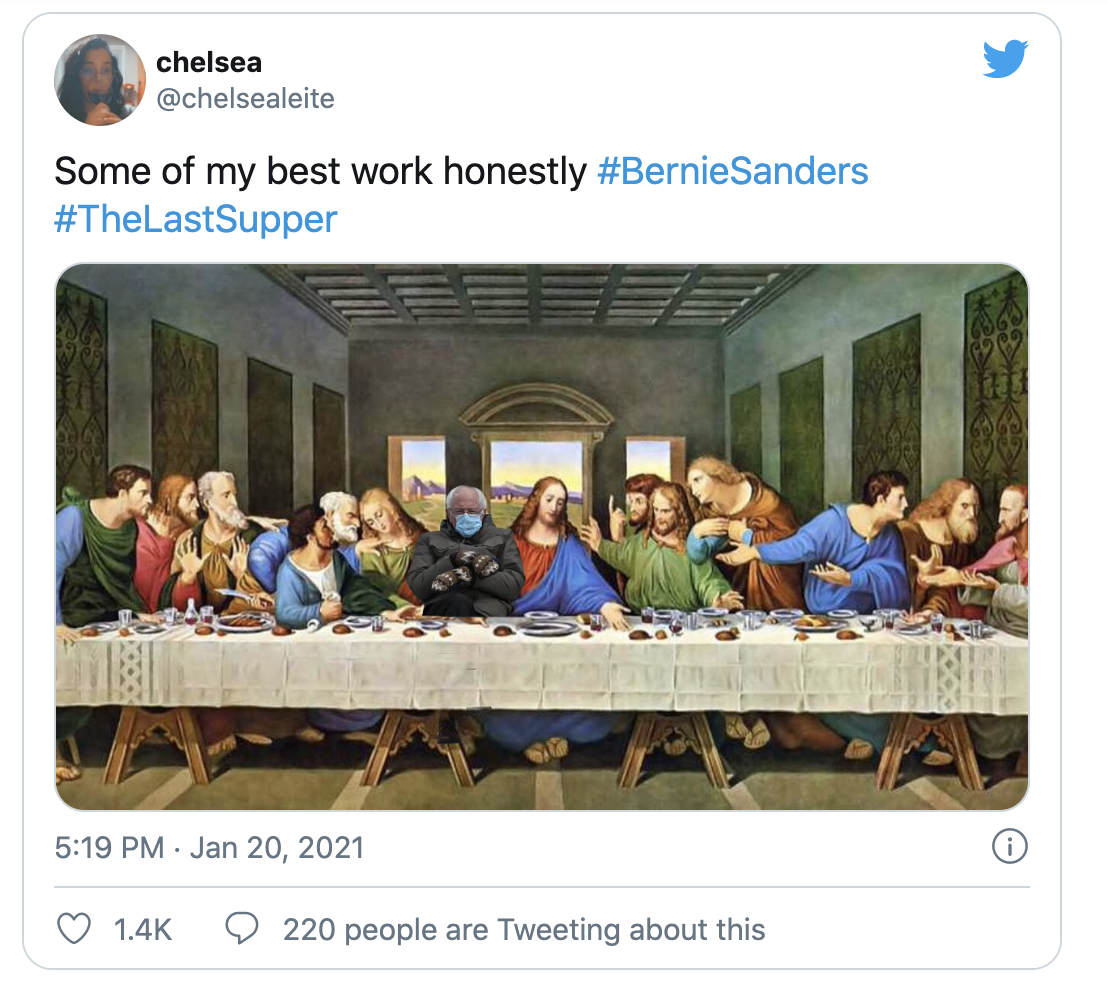 Seeing this wild response to his photo, in a CNN interview, Bernie said:

“What we’re doing here in Vermont is, we’re going to be selling around the country sweatshirts and T-shirts. And all of the money that’s going to be raised, which I expect will be a couple of million dollars, will be going to programs like Meals on Wheels that feed low-income senior citizens. So, it turns out, actually, to be a good thing, and not only a fun thing.”

When you think about what makes content go viral, Sprout Social describes 8 steps:

Some of these steps you can clearly see in the story’s turn of events I describe above. True, Bernie’s personal brand power played a key role here, but what are the meaningful details in this photo that triggered such a huge response?

Let’s look at the visual elements in the photo

Here is the original photo as photographer Brendan Smialowski captured: 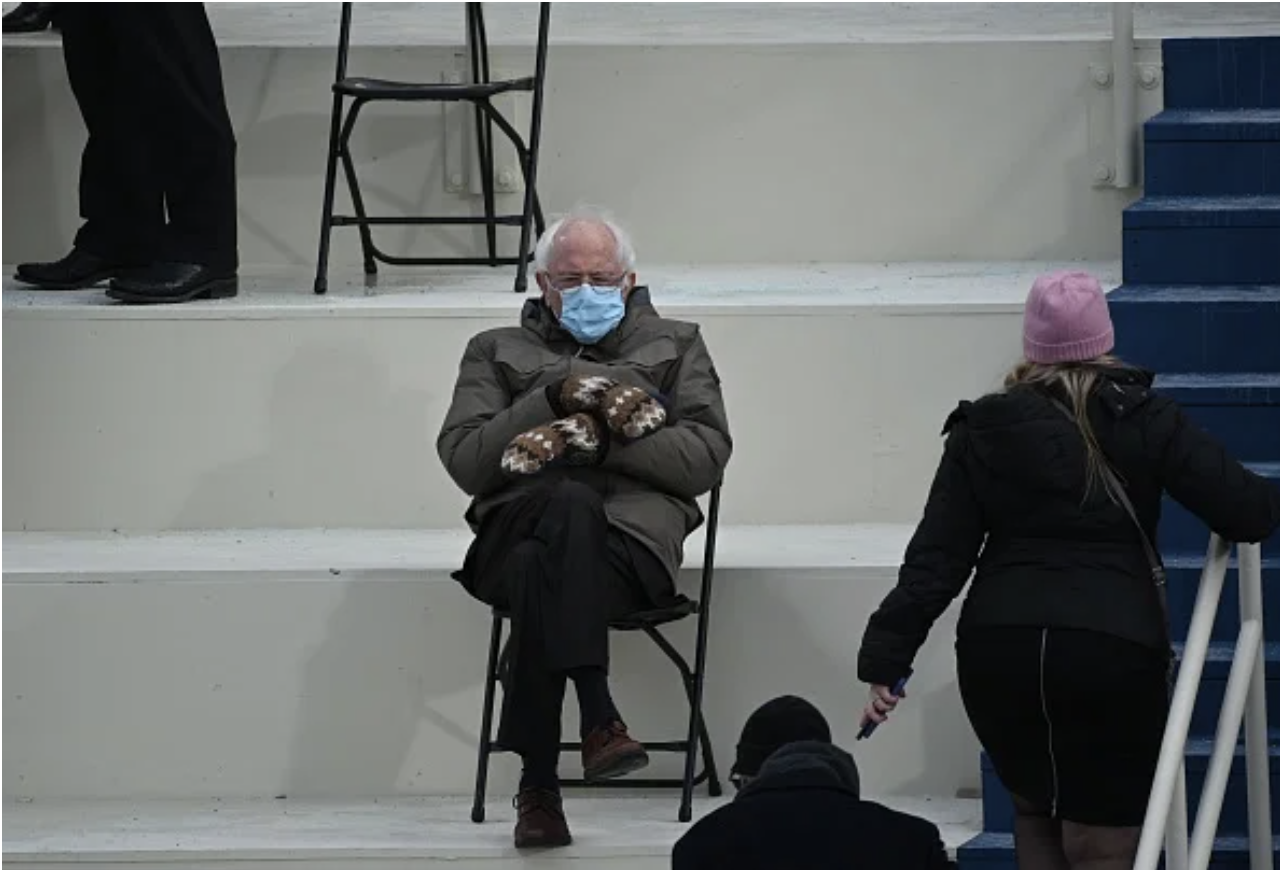 Before diving into the details, let’s zoom out and identify the silent signals

Yes, if you squint your eyes you should be able to identify familiar geometric shapes, each carries a distinct meaning coming from the Psychology of Shapes. 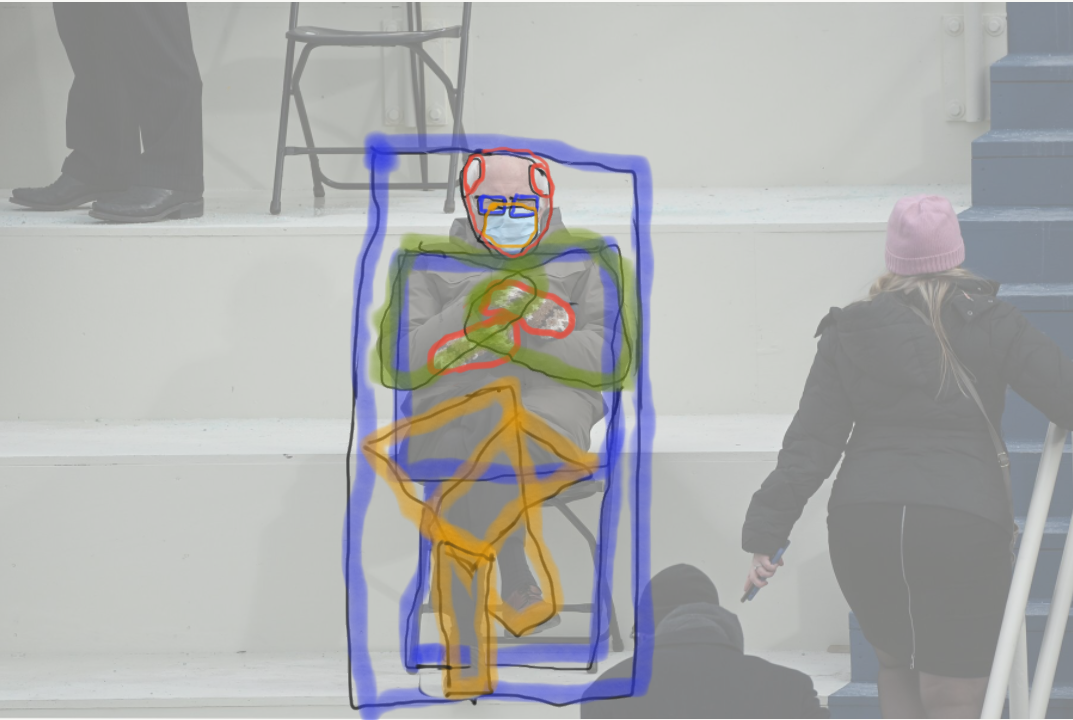 Rectangles (blue areas): The whole composition is assembled around a vertical rectangle, and the rectangular contours of Bernie’s upper body frame, the chair and glasses. Rectangular shapes in general convey meanings of stability, reliability, stubbornness to strong principles.

Triangles (green areas): Triangles in general express power, progression, purpose and direction. In this case the bases on the left pointing inwards. The crossed arms form two triangles. Triangles also convey stubbornness, according to Barbara and Allen Pease in The Definitive Book of Body Language.

Circles and Ovals (red areas): Circles traditionally convey emotional meanings of harmony, protection, unity, commitment, love or community. Meanings that make a lot of sense when you think about the function of mittens to protect against cold.

Space: We see people in motion climbing up the stairs (foreground) and a stationary pair of legs one level up (background). All these activities in the periphery, in my opinion, contribute to the feeling of watching a “slice of life” as it happened and the main focus area – Bernie in the center (mid-ground).

Now let’s examine the meanings behind the key visual elements

The Mittens: The cozy-looking Mittens are framed right in the center of the photo, in a crossed posture, and their unique pattern easily captured the attention and imagination of people with lots of posts using #berniesmittens. The backstory that revealed these mittens were made from repurposed materials has nicely baked the commitment to protecting the environment with a bold fashion statement.

The Coat: Bernie’s green dark coat, another garment piece to protect from the freezing temperatures during inauguration – was also a topic of discussion. Burton Snowboards, the Vermont outerwear company made the coat. Bernie’s fervent fans noticed that the coat was the same coat Bernie wore in another viral video – turned meme “I am once again asking.” The earlier meme has fueled this photo and it also amplifies Bernie’s commitment to simplicity and commitment to reliable garments.

COVID Protection: The photo also reveals Bernie’s commitment to keeping it safe wearing a basic mask and socially distanced from other attendees. He sits closer to the staircase for a quick exit at the end of the ceremony.

In summary, the key drivers for the success of this photo

Bernie’s personal brand power: We know Bernie’s core base consists of a young (under 45) tech-savvy fan base. So this fact alone, can explain the immediate online response that still follows and respond to content about Bernie.

In a recent Rolling Stone interview photographer Brendan Smialowski  aptly sums it up: “Senator Sanders is a very well-defined image and brand of politics. I think this photo is a nice moment. I definitely stand by that. But it trades on who he is. If this was a picture of anybody else and everything’s the same, I don’t think it would be what it is today.”

Belonging: The power of any meme is that it offers people a sense of belonging, in the know, cool timeliness. So much that I have started seeing Bernie’s memes on Instagram of local businesses and chamber of commerce. Anyone wants to ride this train to squeeze more engagement.

Relatability: The photo nicely demonstrates the power of the mirroring effect. During these crazy times, a simple photo offers an escapism outlet. People saw their personal narratives mirrored in this photo of bundled up Bernie. And so they came up with memes that accentuates particular stories they care about the most: from their own grumpy uncle, favorite films, to art installation as this meme demonstrates. 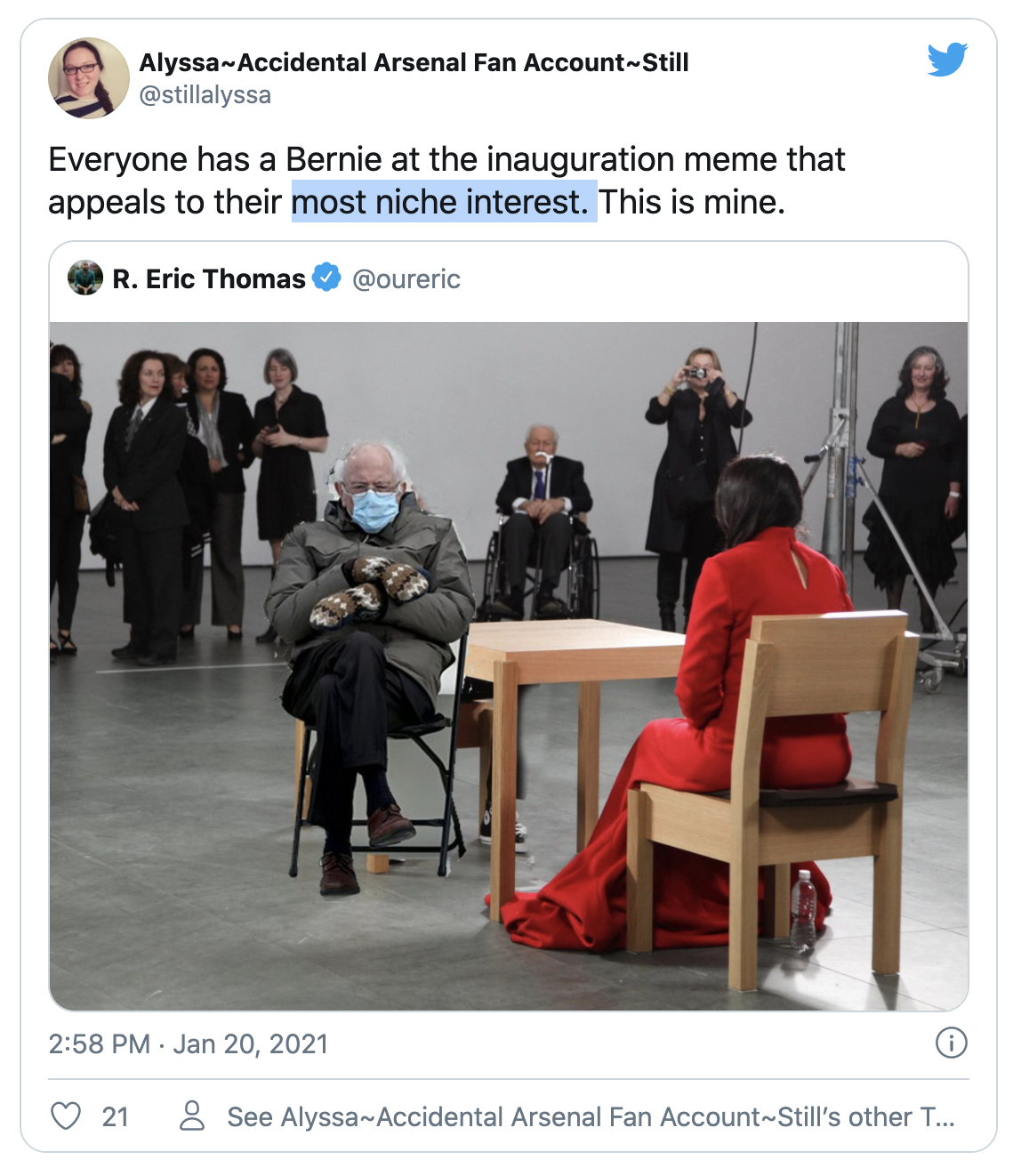 Timeliness: Like any good newsjacking campaign brands often leverage, timing also plays a key role in this viral meme. A transition from a chaotic 2020 and hopes for a better much healthier 2021 provided the backdrop for this cheerful diversion.

Good story with a simple uplifting message: This viral meme has also a very uplifting resolution. With the endless wave of quirky memes around this photo, AP reports that Senator Sanders was able to raise $1.8 million in the last five days made from merchandize sales, all donated for charitable organizations in his home state of Vermont.

In a written statement Bernie says:

“Jane and I were amazed by all the creativity shown by so many people over the last week, and we’re glad we can use my internet fame to help Vermonters in need. But even this amount of money is no substitute for action by Congress, and I will be doing everything I can in Washington to make sure working people in Vermont and across the country get the relief they need in the middle of the worst crisis we’ve faced since the Great Depression.”

In conclusion, what you see here is the power of a story anchored on a strong hero character, amplified by boundless visual creativity, that triggered positive emotions of joy, love, and cry for a social connectedness where people are apart.

And what’s interesting, nothing about this viral moment was planned.

No one expected this photo to make such an impact; not the photographer, not the object, Bernie that confessed to Seth Meyers: “I was just sitting there trying to keep warm.”

The main engine behind this tidal wave were people that saw something so relatable to their lives – their grumpy old uncle, the comfy mittens – and couldn’t resist telling everybody about it.  This also tells you something about the importance of knowing your audience.

What lessons can you apply from this meme story into your visual storytelling? Drop your comments below.

Shlomi Ron is the CEO of the Visual Storytelling Institute (VSI), the primary think tank that brings the gospel of visual storytelling from the world of art into marketing. AT VSI, Shlomi helps brands rise above the communication noise through visual storytelling consulting, training, production, and thought leadership. A digital marketing veteran with over 20 years of experience working both on the agency and brand sides for Fortune 100/500 brands such as Nokia, IBM, and American Express. Along his journey, he was nursing his side passion for visual media with interests in classic Italian cinema (cafePellicola.com) and video art (BukySchwartz.com). Thought leader and speaker at key marketing conferences. He is also the host of the Visual Storytelling Today podcast that ranks the best 20 business storytelling podcasts on the Web. Shlomi's new book: Total Acuity: Tales with Marketing Morals To Help You Create Richer, Visual Brand Stories. His favorite quote: "A story is nothing but a mirror. The magic happens the moment your brand story mirrors your customer’s personal story." Outside work, he is a nascent bread baker, The Moth fan, and longtime fedora wearer likely to jive with his classic Italian cinema interest.

All stories by: Shlomi Ron
How to Create a Visual Storytelling Language?
What Role Do You Give Your Audience?