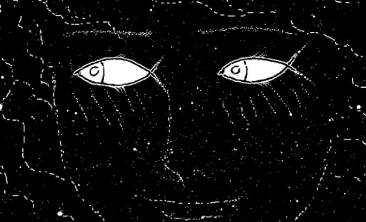 4 Types of Stories That Form Meanings and Behavior

It was the summer of 2002, and I was living in the Chelsea area in New York.

Yep, right on 14th and 7th avenue, a short walk to the famed Chelsea Market. That was years before the launch of The High Line and Google taking over the entire block that forever changed the entire vibes of the place.

My father-in-law, Buky Schwartz was in town.

Buky was one of the early pioneers of video art. A bit about his work. As early as the mid-’70s, his video installations celebrated optical illusions made possible by the interplay between the physical and virtual.

It’s hard to imagine, but back in the mid-’70s video was considered magical as virtual reality today. 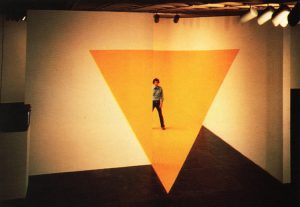 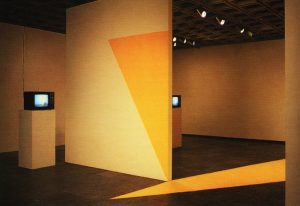 His video art is shown in major museums and galleries worldwide and found in private and public collections like the Whitney, Guggenheim and The Smithsonian.

That day, Buky decided to take me on a gallery tour.

I jumped on the opportunity as I was hoping to get a rare glimpse into what makes an artwork meaningful from an artist’s perspective!

I was not disappointed.

It was a sunny day, and we slowly walked from one brightly-lit room to another while closely observing the works.

We stood at the door of one large room that was completely filled with dirt knee-high. I thought to myself “Nice! Definitely visually impressive but what’s the point?”

“Strange, right? But this is an important piece which is part of the Arte Povera movement that is best known for use of soil, rocks, paper, and other natural elements to create a pre-industrial sentiment.”

“You mean like going back to basics?” I asked. Exactly!

We then made our way to another empty room that at first, I was thinking the gallery forgot to block the door to, since I saw a bunch of wood logs thrown in disarray on the floor. Must be a room under construction, I thought.

Buky motioned me to get closer to the bunch of logs and we silently observed them.

“No way! Are you telling me this is art too? Anyone can throw a bunch of wood logs on the floor!” I was thinking. But not to sound crude or better yet clueless, I asked: “What’s the story of this masterpiece?”

Buky chuckled as he sensed my confusion, and with an understanding look said:

“Yea, but it depends WHO first put them on the floor!

You see, this piece is not about how easy it is to create, it’s a seminal work that represents the transition from Minimalism to Conceptual Art – from a focus on a minimalist art detached from any outside emotions or influences to ordinary objects that represent ideas.”

Wow! It’s the backstory that all of a sudden made me see these random logs under a whole different light. The evolution, the logic, the intent, and above all – the human quest to find new ways of self-expression.

That gallery tour taught me a lot. Yes, sometimes ideas are more important than the actual visual objects your eyes see and your logical brain informs you. 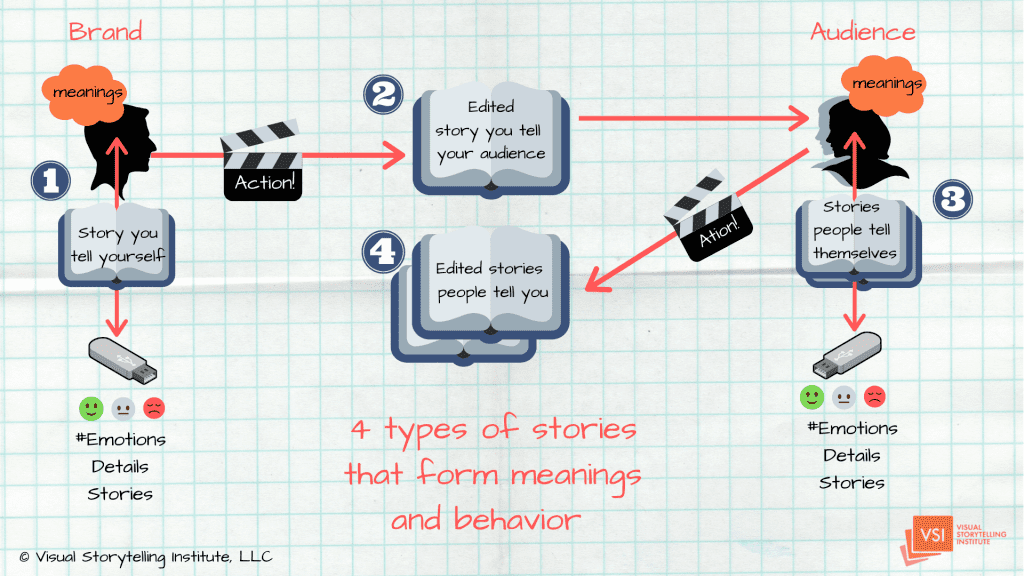 I share this 18-years old story with you to demonstrate a human mechanism we all share. It’s true for both our personal and professional lives when we communicate with our audiences.

After all, we use the same “hardware and software” in both domains 🙂

As the infographic above illustrates, we are constant seekers of meanings to make sense of the world around us, so we can make informed decisions.

When I first saw the bunch of wood logs thrown on the floor, I ran that information against my personal database of past experiences and beliefs – and concluded (i.e., generated a meaning) that this must be a room under construction.

But when I realized that this was an actual artwork, another scan against my internal narrative suggested that there is no way this could be considered art.

Kinda reminding me of the recent hysteria around Maurizio Cattelan’s banana, duct-taped to a wall from last December at Art Basel, right?

I naturally didn’t say it, I edited my response and instead asked: “What’s the story of this masterpiece?”

The same logic works when you – the visual storyteller – plan your story.

You first research your audience, the competition, your past stories’ performance, add your and your team’s professional know-how, and then generate meanings you want your story to focus on.

Before telling your story, though you EDIT OUT details you may have wanted to tell but may be too sensitive or your legal team stopped you for some other reasons. You then end up telling an EDITED story you believe will best resonate with your audience and keep your colleagues happy.

Your audience will do the same.

They’ll run your edited story against their personal narrative about the topic. This narrative is comprised of multitude of past stories, like events they directly or indirectly experienced to generate meanings.

Based on the resulting meaning (positive, neutral or negative), they’ll often clean up questionable details and come up with an EDITED response that could range from completely ignoring your message to DMing you for a meeting to learn more.

Another way to think about this, is every time you communicate new information to your audience, they will parse it through four quadrants:

Actions You Can See: say, and do.

Some people will be more transparent and say and do what they feel and think. Others – will aggressively EDIT their true feelings and thoughts and end up saying and doing a “safe behavior” to make them look good. So, as a visual storyteller who is looking to create authentic stories that will closely represent your customer true voice and motions – you need to dig much deeper.

It’s those details that carry the highest emotional value that people will surface up first. These details could come from the distant past or the present. In this sense, emotions work like hashtags that allow people to retrieve faster highly emotional moments from the past to inform their decision in the present.

When you do a comprehensive market research and customer interviews to identify emotional details your audience truly cares about, and then strategically bake your “customer language describing the problem” into your stories, only then, your brand story will have a good chance of becoming your customer’s personal story.

An effective story will not only support your larger brand narrative but also authentically mirror your customer’s world:

In conclusion, to create impactful customer-centric stories your research will allow you to find that sweet spot between what your brand wants and what your customer wants.

How are you managing the 4 types of stories that form meanings and behaviors – in your business?

Need help developing your stories to better represent the customer voice? Feel free to throw some time on my calendar and I’d be happy to discuss.

All stories by: Shlomi Ron
How to Tell Visual Stories Like A Media Company?
What is Visual Storytelling Photography?